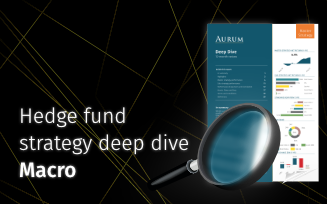 Macro funds have delivered positive performance over the 12 months through September 2022, with an average return of 2.2%. Macro returns have been driven by strong performance from commodities and global macro funds in particular, whilst poor performance from emerging markets macro (“EM macro”) funds significantly detracted from overall aggregate performance. The master strategy was positive for 8 of the last 12 months, with the worst monthly drawdowns (both of -1.6%) occurring in October 2021 and June 2022. The best monthly performance was 1.9% in August 2022, followed closely by 1.8% in March 2022. On a relative basis, performance has been strong given the extreme levels of volatility across global markets. The period under review includes ‘the worst cross asset selloff since 1981’[1] in August 2022 with simultaneous declines across equities, commodities, corporate and government bonds.

On a relative basis, performance has been strong given the extreme levels of volatility across global markets

Macro is one of the smaller master strategies monitored by Aurum Hedge Fund Data Engine, as measured by AUM. Macro strategies account for $316bn out of the $3,010bn combined AUM monitored as at September 2022. The macro master strategy AUM over the period fell by $11.1bn; the decline was primarily due to net outflows of $16.3bn though was partially offset by net profits of $5.2bn. The number of monitored macro funds fell by 47 over the last 12 months to September 2022, from 384 to 337. At a sub strategy level, the change in fund count was -7 across commodities, -4 in fixed income relative value (“FIRV”), -27 in global macro and -9 in EM macro.

Macro was the fourth best performing master strategy in the 12 months through September 2022 (see page 6 of the report). All sub-strategies except for EM macro had positive performance over the period. The range in sub-strategy returns over the period was wide, from -13.5% for EM macro to +9.5% for commodities.

Commodities, global macro and FIRV sub-strategies outperformed the HF composite over the period

At the sub-strategy level, commodities, global macro and FIRV outperformed the HF composite over the period, whilst EM macro was a notable underperformer. Global inflationary pressures surged through most major asset classes, creating considerable disruption and subsequently led to increasing monetary policy divergence between countries. Key themes such as long positions in commodities and US dollar, along with short positions in fixed income and equities, have provided ample opportunity for macro funds. Many EM macro funds have been wrongfooted during the year by the Russian invasion of Ukraine, as well as heightened fears of a global economic slowdown.

Commodities was the best performing macro sub-strategy, generating an asset weighted average net return of 9.5%. The sub-strategy has performed very well over the last three years, breaking what was a persistent pattern of relative under-performance over the prior decade. The clear trend this year has been the rise in commodity prices across the board due to a plethora of reasons including: chronic underinvestment leading to very tight supply, demand acceleration post-COVID, supply chain disruptions and of course the war in Ukraine. The dispersions within commodity markets during the period is so high that it is difficult to generalise the key trades in this sub-strategy, but some key themes were long energy (particularly oil and natural gas, earlier in the year), metals and softs.

Commodities was the best performing sub-strategy. Over the past three years it has broken the pattern of relative under-performance over the prior decade.

Global macro funds returned 7.6% net of fees on average, weighted by assets. Global macro funds are often sought out by investors to provide ‘crisis alpha’. Global macro funds have delivered strong performance amidst a market in which global equities** and bonds* fell by over 23% and 21% respectively over the last 12 months and are down 27% and 20% year to date as at 30 September. Performance also compares favourably to the broader hedge fund universe, which is down over 3% in the last 12 months and down 4% YTD as at 30 September. Most of the sub-strategy gains can be attributed to directional rates trades. These have most notably been in the US, where there has been one of the more aggressive hiking cycles on record as a response to the highest inflation figures seen in decades. Another area of focus has been in FX, where long US dollar and short Japanese yen have been very profitable trades.

FIRV funds generated an asset weighted average net return of 4.5%. The stand-out month in the period was October 2021, where volatility in government bonds and interest rate markets during the final days of the month caused large mark-to-market losses and FIRV funds experienced negative performance of 2.2% on average. Whilst volatile, the subsequent environment has been fertile for the strategy as central banks have taken decisive actions this year to begin to reduce their balance sheets, creating supply/demand imbalances. Notable trades included Japanese cash-futures basis in the summer of 2022, as the Bank of Japan’s yield curve control policy and commitment to ultra-low rates came under pressure from yields on government bonds reaching multi-year highs.

EM macro was the worst performing sub-strategy, averaging a net return of -13.5% over the period. In February, many funds were caught off-guard, having been long Russian and Ukrainian assets due to strong fundamentals and a positive outlook for commodities. Some of these assets have since been side-pocketed, lacking clarity on their trading status for the funds. Elsewhere, the typical net-long bias that EM macro funds carry due to both difficulty in shorting and a desire to capture EM growth, has meant negative performance as these markets have been roiled by fears of a global slowdown.

Looking at the performance of the sub-strategies over several time horizons, one can better observe their performance through the cycle. As shown below (see page 12 of the report), FIRV has produced the highest compound annual returns over the last ten years, followed by global macro.

Over the last three years, commodities have been the stand-out performer, with annualised returns of over 10%, compared to returns of 6% and 7% for FIRV and global macro, respectively. Over the last five years, FIRV is the only strategy to have always sustained a positive rolling 12-month net return. The three-year Sharpe ratio is greater than 1 for all sub-strategies except EM macro, and FIRV ranks highest with a Sharpe of 1.67.

EM macro has had the lowest alpha contribution since January 2013, contributing negatively to total return. The sub-strategy did have a period of stronger performance and positive alpha from late 2017 to March 2020 but has struggled since.

Rolling 12-month net inter-decile performance spread across macro funds has increased meaningfully in recent years, starting from March 2020. The spread had oscillated roughly between 20% and 30% (2012-2019), but since March 2020 has oscillated between 25% and 40%. Dispersion has historically peaked during times of market stress, which is not surprising given the differing biases inherent in the sub-strategies and the somewhat heterogenous nature of managers across the macro strategy.

Macro funds managed $316bn at the end of September 2022 (see page 17 of the report), representing 10% of the $3,010bn in hedge fund assets monitored by Aurum. The largest sub-strategy by AUM was global macro, which managed $156bn as of the end of September 2022. The most populous strategy was also global macro, which counted 170 funds. The sub-strategy with the fewest underlying managers was FIRV, which counted just 39 managers. The average AUM per manager ranged from $1.9bn in FIRV to $435m in commodities.

The Hedge Fund Data Engine is a proprietary database maintained by Aurum Research Limited (“ARL”).  For information on index methodology, weighting and composition please refer to https://www.aurum.com/aurum-strategy-engine/. For definitions on how the Strategies and Sub-Strategies are defined please refer to https://www.aurum.com/hedge-fund-strategy-definitions/